“Come to Maine next fall,” urged my “new” brother Alan as his visit to Indiana wound down, in September of 2017.

He had traveled a thousand plus miles to meet us, the half-sister and family DNA had linked to his paternal side, and now he was inviting us to visit him and his family, and become acquainted with the area where my birthfather and siblings grew up.

We loved the idea from the first mention and so began the murmurings and repeated references to “Maine next October”.

But first we’d journey to Hawaii to meet my birthfather and sister, and if the opportunity arose, Alan implored us to mention the plans for our trip east in 2018. And while we were at it, why not convince bio dad to join the fun? It arose, we mentioned, he showed interest.

All year we talked about “Maine in October”, hoping our entire immediate family could make the trip. The thought of meeting more biological relatives and the chance to introduce my kids and grandson to their biological grandfather / great-grandfather, had my mind whirling. Of course, we’d have to finagle around the work schedule of six adults on our end and one in Maine and encourage retired bio dad to get on board.

With a fair amount of ease on our side, the pieces fell into place and the hoped-for trip shifted to a reality with confirmed vacation time for the working adults. And then came an affirmative nod from birthfather/grandpa/great-grandpa.

So many firsts to look forward to . . . None of us had been to Maine which we’d heard to be simply gorgeous in the fall. Our immediate family hadn’t vacationed together since a weekend excursion when six-year-old grandson Dylan was still housed snuggly in his mommy’s tummy. And the chance to meet more bio family in the form of nephews, first cousins, second cousins, and a grandpa. 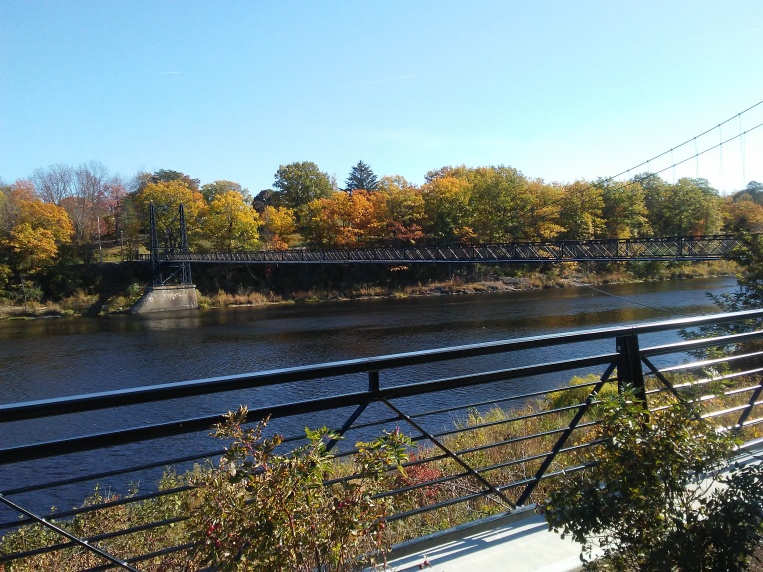 My organizational planning genes rallied and shifted into overdrive as a thousand details begged for attention. The “fixer” part of my personality, aided by my tendency to worry and my leanings toward perfectionism, all yearned for this second, once-in-a-lifetime trip, (Hawaii being the first) to be awesomely amazing in every way for all seven of us. After months of late-night planning, the day of our departure finally arrived.

Our flights, although exciting for the first-time fliers among us, were thankfully uneventful in air-travel terms. Having left a 95% green landscape in Indiana, the fall foliage that greeted us, even from the air, was stunning. “Gram, it’s all orange!” exclaimed Dylan, peering out the window as we descended toward our final destination.

With only one mishap involving a lost jacket and wallet, we arrived—two from Colorado and five from Indiana—in time to meet for dinner. Or supper, depending on your term of preference for the evening meal.

A lot of taking it all in took place around the table that first night after the initial introductions. As I watched my daughter and son interact with our newly discovered relatives, I was sooooo grateful that my husband and I had already met those in attendance that night. It would have been far too overwhelming for all of us to meet the new kin for the first time, at the same time.

“You look like my mother,” announced bio dad, pointing at me from the other end of the table. An observation that had been made time and again over the past eighteen months about my Grammy, as my siblings referred to her, who’d been gone for thirty years.

With the promise of more family introductions and time together tomorrow, we retreated to our Airbnb lake house, with a bountiful supply of groceries. I breathed a huge sigh of . . . something much more than relief. Spirits remained high despite a long day of travel, the lake house was beautiful and would suit our needs well, the radio had declared the fall foliage at “peak” this weekend, and my children, their significant others, and grandson had been welcomed by my biological family. 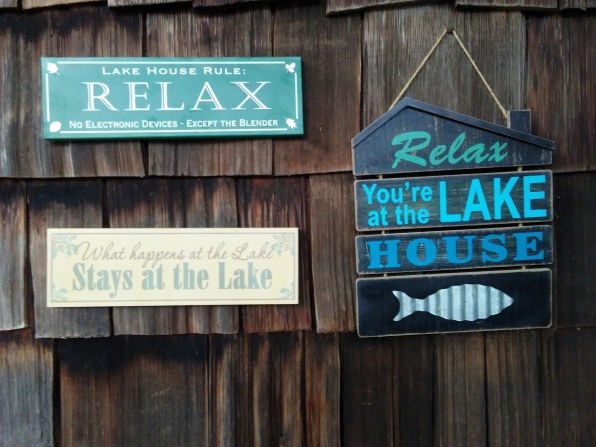 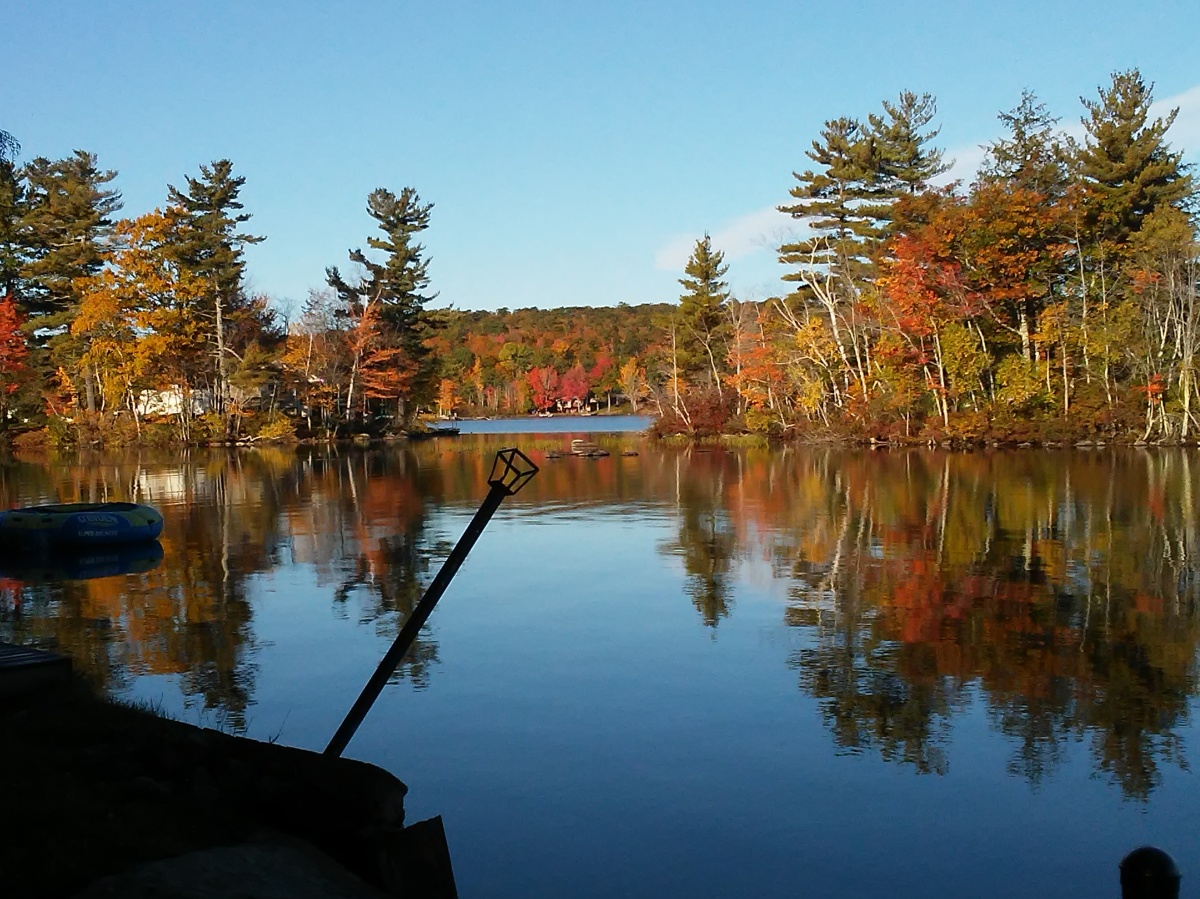 For the next three full days, we took in the sights of this new-to-us breath-taking part of the country and made up for lost time with family as eager to spend time with us as we were to be with them. Alan hosted our gang, his family, and our bio dad accompanied by our Thai sister, for a total of twenty, at his house for a feast of steamed lobsters and clams. We were all about indulging in the local cuisine. When in Maine, you know.

We pored over old pictures accompanied by tales of times long ago. Remarked on likenesses that I honestly will never grow tired of discovering, like how young Alan’s pictures bare a striking resemblance to our son. And might Dylan and Alan’s granddaughter, Eliza, look a bit alike as well? The siblings chatted, first cousins mingled, the second cousins raced around as youngin’s do. And as Alan had once suggested, we didn’t think about the relationships in terms of “halves”. 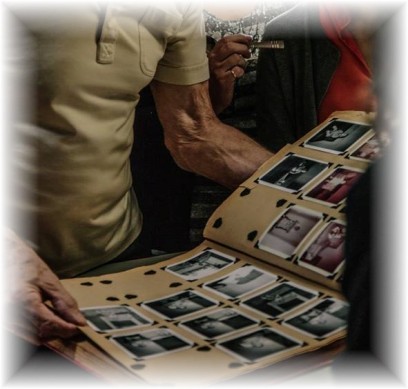 The next day found us gathered for Sunday brunch, the traditional family-together-time bio dad hosted when he journeyed back to his old stompin’ grounds. We tucked the second cousins in a booth with crayons and such next to the long table of hungry, talkative adults. Our end of the table was quieter. Not so much because this was our first family Sunday brunch, but because this was it. The last time we’d all be together as a group, a family, on this trip. By now familiar with and learning to be accepting of how this new-to-us family was not the get-together-often type, still I couldn’t stop the unspoken wonderings and the questioning glances shared between us. Would we see them again? If so, when and how and where? Very similar contemplations to those that had weighed heavily on me when leaving Hawaii.

But the more important concern of the moment, a group photo to capture the special occasion. Many candid shots had been snapped at the family bash/lobster fest the previous evening by our son’s girlfriend who happens to be an accomplished artist and photographer. But the group pics had been saved for last. So, we transitioned outside to a spot bio dad had scoped out, despite his well-known camera-shy status. Sunshine warmed the fall air as our personal photographer shuffled us about, offering bright-sun-don’t-squint tips. Oh, one of the siblings together? Of course. How about great-grandpa with the little ones? Absolutely.

And then too soon, it was time for goodbyes. I beckoned my kids not to miss the final moments with their grandpa. “This is goodbye,” I said, motioning them toward him as the group spread out across the parking lot as if we’d reserved the space. “Not goodbye, so long,” he insisted as hugs and parting comments were exchanged. Lots of hugging all around, more moments captured on film by our attentive photographer. Then, with a sweeping wave to his offspring, bio dad excused himself. The photo session continued as the rest of us lingered, soaking up the togetherness, making memories, and being silly. A last, final round of goodbyes sent us on our separate ways.

I felt sort of numb as we drove away, pushing back against the acceptance of how normal family functioned for these folks. But no tears, choosing instead to drink in the autumn beauty and focus on the remaining time together for the seven of us. Besides, another adventure awaited us that afternoon.

At Boothbay Harbor, we buttoned up for an hour plus boat tour of the nearby islands under clear, bright blue skies. Some of us huddled together against the chilly wind at the bow for the best view of the shoreline, the lighthouse, the seals, while others took in the sights from the heated quarters below deck. Later, we dined at the water’s edge, indulging in more of Maine’s fresh seafood, entertained by Gus, the restaurant’s seagull mascot.

The next day, Alan joined us for a two-mile hike in a gorgeous woods that set our cameras to clicking.  We shared a fun, delicious burrito lunch at a local establishment, one we vowed would make our list of regular haunts if we lived in the area. As the younger five of our party would be flying home in the morning, it was time for them to bid “so long” to Uncle Alan. The sentiments all around filled with sincere promises to meet up again. Goodbyes are no fun, you know? Even the “so long” kind. 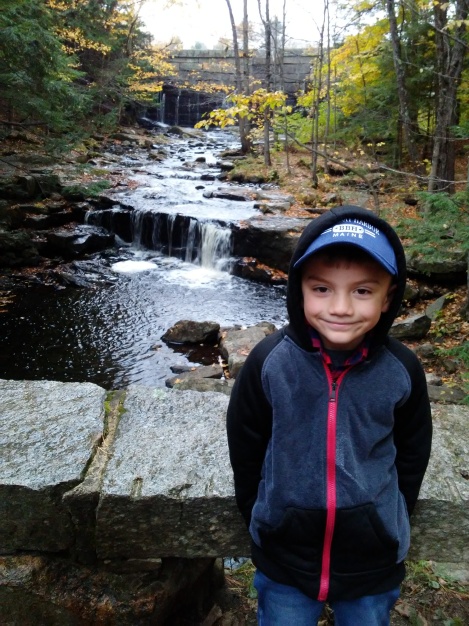 A last evening of lounging together at the lake house brought our totally awesome, did-not-disappoint, whole family vacation to an end. After dropping the fam at the airport the next morning, we settled into a hotel for three more days of soaking up all things Maine. On the agenda? More local cuisine with Alan, a jaunt to Acadia National Park, and of course, a cemetery field trip, as what would a vacation to a genealogically significant locale be without a trip to a cemetery or three?

But first “There’s something I want to show you . . . ” Alan beckoned us to his car for a mystery excursion. He pointed out landmarks, “We went to high school here,” and other interesting trivia as we cruised about the nearby tiny town where he and my siblings had spent most of their growing up years. And then, he whipped out the file folder containing the pictures that he’d brought to Indiana from Maine, that had traveled with us to Hawaii before journeying back to their home in Maine. He held up a photo of my three smiling half-siblings as children, sitting on an outside staircase. “This was taken right here.” He pointed out my car window at that very staircase. My mouth agape, I held the photo to the window. It was a truly wow, goose bump moment. A minute later, we stopped at another exact past-picture location and then a third. For those brief minutes, I felt totally immersed in my siblings younger lives.

Then it was on to the gravestones of our grandparents and great grandparents as well as various aunts, uncles, and cousins. Folks I knew from studying their vital statistics on the family tree. Inspired by Dylan’s attention to the family markers back in Indiana, Alan had spent time tending the plots and stones a few months earlier. 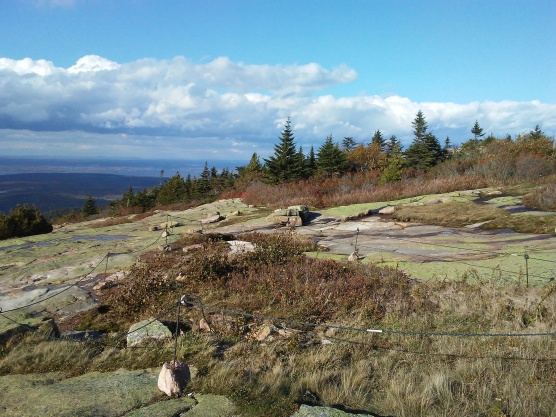 We drank in the stunning beauty of Acadia National Park. We indulged in more local eats and took in every possible local sight, right up to the moment of rushing to the airport to catch our flight home. By week’s end, we’d compiled at least a hundred reasons for coming back to Maine, including the extended family reunion the next July for our grandmother’s branch of the family tree.

Alan had indeed accomplished his goal: that we would have such a great time we’d want to come back to Maine, often. 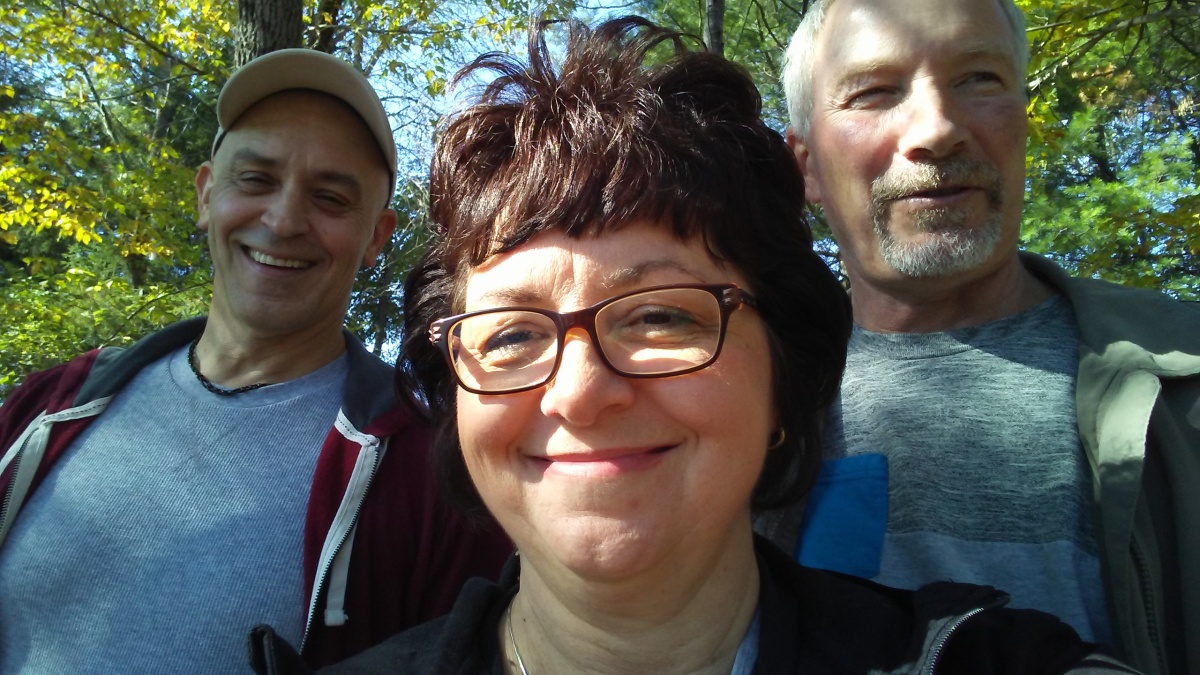